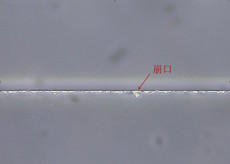 The smaller the diameter of the grinding wheel with the lower the grinding linear velocity, which will lead to the increase of grinding amount of single abrasive on the sand surface, thus increasing the grinding force and making it easy to produce edge breakage.

The coarser the grit size means the less abrasive particles on the surface, which also leads to the increase of grinding amount of abrasive during grinding, thus increasing the grinding force and making it more likely to produce edge breakage.

In order to effectively control the edge breakage in the required range, the diamond grit size should be selected reasonably.

However, it should be noted that the reduction of slot Angle will affect chip discharge to a certain extent, so it is very important to control the appropriate Angle.

Concentricity is also the beating size we often say, the bigger the beating, the more unstable the grinding head, the number of abrasive involved in grinding decreases, resulting in a single abrasive grinding volume, large force, resulting in the collapse of the more easy to produce.

Therefore, strictly control the concentricity of the grinding head is also the top priority.