In the grinding of the blade surface of the whole blade disc, the thickness of the thinnest part of the blade is less than 1 mm, which is a typical thin-walled weak rigid part. At the same time, due to the narrow channel between the blades of the whole blade disc, it is difficult to design a tooling fixture that balances the grinding positive pressure for the grinding object, so that the workpiece undergoes weak rigid bending deformation of the ground part under the action of the grinding positive pressure. In addition, in order to fit complex curved surfaces, the contact wheel generally uses super-elastic materials, which can undergo different degrees of elastic deformation under the action of different grinding contact pressures, thus forming a weak rigid deformation between the belt and the workpiece.

2.2 Analysis of Grinding Deformation of Integral Blade Disk by CNC

ANSYS was used to simulate the grinding deformation of the blade back and leaf pot of the whole blade disc. The simulation results are shown in Figure 9 and Figure 10.

Fig. 9 Simulation of deformation during grinding blade back 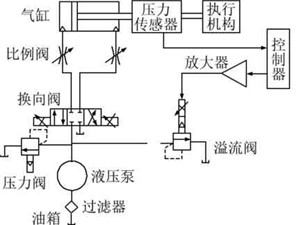 The pressure control system mainly includes fuel tank, filter, hydraulic pump, pressure valve, directional valve, proportional valve, cylinder, pressure sensor, controller, amplifier, overflow valve and other components. The controller is the core component of the control system, which can collect and process the feedback signal and send out the control signal to control the spool of the electric proportional valve to move, so that the gas flow into the cylinder changes accordingly. Through the change of the output pressure of the cylinder, the grinding pressure is changed within a certain range, and the grinding deformation is controlled to achieve the purpose of accurately removing the grinding allowance.